2018 has been the most surreal, serendipitous, and successful year by far for +1476+ and for all of us on personal levels as well. We’ve rekindled relationships with old friends, solving our differences. We’ve made many new friends as well all over America on tour and online (and particularly in my case, a very serious girlfriend after making peace with the idea of being alone for the rest of my life haha). Our Season Draws Near was released on vinyl which was the format we had in mind when writing the album back in 2014-2015! We acquired outstanding live musicians in Young George and Nate (I’d give you Nate’s nicknames but they’re NSFW…) who also kick ass respectively in their own bands—Louzy and Seldom Sun (as well as a Guns N’ Roses tribute band Nate is in—he’s Izzy…). We played about 50 shows this year, touring America twice, visiting places we’d never have imagined at this time last year. We played a show with Alcest last month…one of my favorite bands and the main inspiration for me to begin playing live again after swearing off of it for many years. Neil got a sponsorship with the drum company of his choice—Canopus—whose drums were a huge part in shaping the sound of Our Season Draws Near as well as making the live performances sound faithful to the record. For myself, I completed artwork for the novel Bad Word 2: To Kill An Archangel by Curtis M. Lawson and a shirt design for the Black Metal/Experimental cassette label Folkvangr Records. In many ways, we’ve also devoted ourselves to living more meaningful lives and digging deeper within ourselves to see what that means—to live more bravely, honestly, and uncompromisingly, yet conscientiously and considerate as well.

The coming New Year holds many new projects for us. The earlier half of the year will see us included on a Bathory Tribute album being released by Folkvangr Records covering the song Blood Fire Death. I will be doing some of my first live shows since 2016 as Monastery beginning at the Northeast Dungeon Siege festival in March in Worcester, MA—one of the days to be headlined by the man himself, Mortiis—one of my longtime inspirations. Tickets available here: https://www.brownpapertickets.com/event/3923845 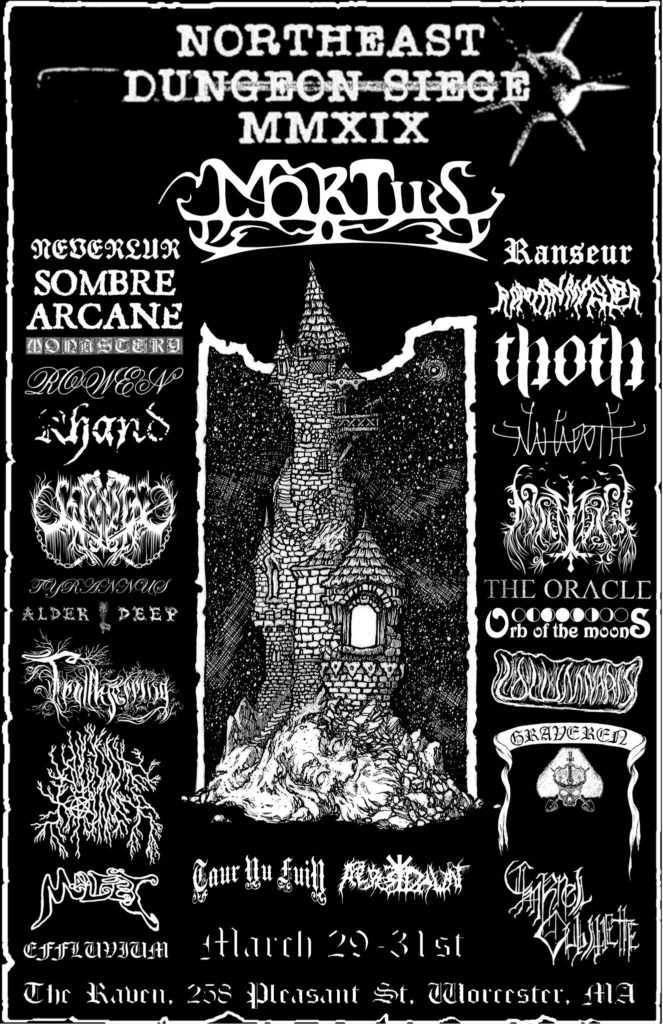 The new Monastery album is complete and I should be wrapping up the final mixes in the next week or so. Stay tuned for news on that!

Regarding +1476+, our priority is to write and record the follow up to Our Season Draws Near throughout 2019. When we first made that album, I felt like it was an ending of sorts. I felt like we had distilled different elements from all of our previous releases into one of our most cohesive and lean works to date. But as time passes, OSDN has become a new beginning or threshold for us. To me, it has transformed into a gateway to a new era and has formed a new foundation. In a certain sense, it feels like a “first album” to me and a creative rebirth. I think in 2019 we will be playing far less live shows as we wave goodbye to the OSDN era and sail towards new horizons with our upcoming album. That said, we have big news coming up in the very near future that will directly relate to live shows and touring. If we are quiet in 2019, then consider it the calm before the storm.

Before I wrap up the obligatory Year End list, we’d like to take a moment to thank everyone who has supported and/or taken part in our journey this past year—most importantly Nate and George who hold far more importance to us than I think they realize. Remaining calm and collected in any given situation while living in a van for weeks at a time is no easy feat—so thank you both for that and so much more. I look forward to living like pirates with you all again in 2019. Martin, Stefan, Andreas, and Prophecy for your support and friendship. Our families, friends, and partners for always selflessly supporting us in all ways. Our inaugural tour friends Völur—we’re bound for Life! Adam Luca & Cory Flintoff for the time and energy they devoted to us. Our US booker Steve Colca of the killer band Destroyer Of Light. Everyone who supported us on tour, booked us, promoted us, housed us, fed us, etc. all over America. There’s way too many of you to list but we remember each and every one of you. Our Brother of Gondor, Mark Addington at Folkvangr Records. Breaux Silcio at Residency Records and Z/28. We are insanely grateful for all of the friendships and beyond that we have developed as a result of being in this band. We’re both moody introverts and we are fortunate that we have music as gateway to the world and all of you remarkable people. Without it, we’d have nothing. So, thank you.

Year End list time. Neil opted out this year because he mainly listened to older music all year so you’re stuck with me.

(Dirty, punk-charged, and avant garde rock and roll from Denmark. Always impressed with these dudes. Album of the year for me. I can’t stop listening to it.)

(Beyond description… Folky, experimental, archaic, terrifying, spiritual, emotional weirdness from one of my favorite artists.)

(Billy Corgan is one of my biggest influences and his song writing is still fucking formidable after all these years. Very happy!)

(The most uncompromising, experimental, and refreshing NIN work since The Downward Spiral in my opinion—and I love every NIN album.)

(Celtic/Middle Eastern/Mediterranean World Music and one of my heroes.)

(Oceanic, electronic, emotional weirdness done in the way that only an artist on the Danish label Posh Isolation can do.)

(Raucous black metal from New England in the vein of old Enslaved/viking era Bathory and even some 70s prog. Tape on Folkvangr Records.)

(More moody, oceanic, electronic weirdness from Denmark’s Posh Isolation label. CA is one of my favorites.)

15. Sanguine Moon – What Shadows Once Hid…

That just about wraps it up. Thank you everyone for a tremendous year, the best yet. Let’s destroy 2019.