Over the last year we recorded a lot of music in our own studio… Too much for one CD… Though we got rid of many songs we didn’t end up feeling good about, we still had extras that we loved but didn’t fit into the flow of the album. So, we decided to make a special edition to include this and some other things as well.

Before we get into that, here’s the Wildwood track listing:

Wildwood is about 57 minutes long. The special edition, limited to 40 copies, will come with the Wildwood CD; an EP of our favorite extra songs from the recording sessions called The Nightside on CD; an original 9×12 painting for one of the songs on Wildwood/Nightside; hand written lyrics for that song; and…this last one is a bit odd but we think it’s funny…some of Neil’s notes during the writing/recording process. Neil has extreme OCD note taking habits. His whole life is planned and documented on little scraps of paper, backs of receipts, napkins, etc… and they are fucking everywhere…! All over the studio…all over the kitchen table…all over his car… He has well over a hundred for Wildwood drum stuff alone… So, some these are coming your way now haha. 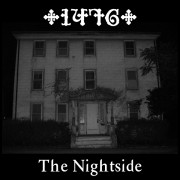 The Nightside EP is just over 20 minutes long. We found that these songs together created their own somber atmosphere that’s completely separate from Wildwood and we are happy to present it in this way to you.

The packaging includes lyrics and notes/explanations for the songs. The version of Good Morning, Blackbird presented here is dramatically different than the Wildwood version.

We have a tentative release date of December 13th on the new moon. On the off chance that Mayan prophecies come true and the world is decimated, I’ll have the satisfaction of knowing we put this fucking album out first.

Wildwood…just in time for the Apocalypse.

A deep bow to you,